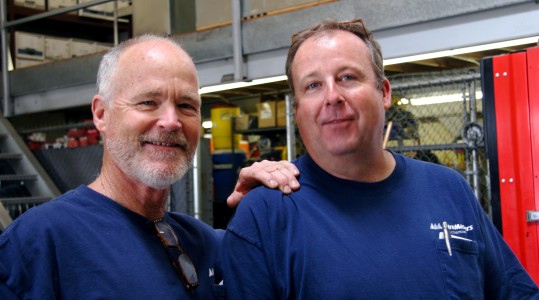 Founded as a partnership in 1974, AireMasters was incorporated in the state of California by the original principals, Charles Thompson and Stephen Wurth. In 1977, Charles Thompson, with his wife Linda, bought Mr. Wurth’s stock. Actively involved in the daily operations of the Company, Chuck and Linda have spearheaded AireMaster’s rise to become one of the most respected air conditioning contractors in Southern California.

AireMasters has consistently been one of the first companies to evaluate and utilize new and innovative ideas and products. Currently, the Company employs the latest industry software in its operations. The applications include Estimating (Quickpen), CAD (AutoCad MEP), CAM (Vulcan which integrates with Quickpen and CAD), BIM and 3D (Quickpen, Navisworks and Revit) Project Management (Meridian’s Prolog) and Accounting (The Construction Manager).

AireMasters prides itself on possessing the ability to provide a complete (turnkey) HVAC system, including in-house engineering and design and build abilities, duct fabrication and installation, chilled and hot water systems, commissioning, energy management systems and DDC controls as well as the maintenance of the systems that we install.